It's been a while.  I thought maybe it was time to get some time behind a few guns.  I loaded up, well, probably what would be a frightening amount of hardware to some people and picked up my brother and headed to the range.  I wanted to put some rounds through a few to test them out and do some drills as well.

Most of my work was drawing and firing multiple shots, sometimes on multiple targets.  I took out my dad's mostly un-fired full size Para Ordinance 1911 and it did ok.  It needs some more rounds put through it.  For the price he paid, it's a steal.  I put a bunch more rounds through my Kel Tec P3AT and that went without a hitch.  I'm pretty happy with that one since it got back from the factory.  My brother learned a few things as well and then he played on the AR-15 a lot.

Lesson learned from that target, don't shy away too much.  On that one I drew and fired a Glock 23 (.40 S&W) and engaged the target on either side with one round.  The top rounds were the first attempt.  I felt that was a little on the outside edge of a solid hit.  The bottom two was the second attempt.  Now, this is by no means a scenario I would think would be smart or viable in real life.  However, it sure does help to narrow focus on a smaller target and give you a "no hit" zone.

Then my brother started playing with the AR

Oops.  Yeah, he nicked an ear, but I guess I wouldn't be concerned about putting a band-aid on my ear-lobe if the bad guy was taken out.

In my defense in the next picture, I was engaging four targets and moving. 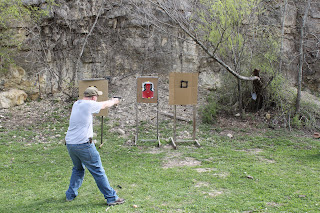