I was able to get my hands on a Ruger LC9 from a friend that has recently obtained her permit to carry.  This will be her carry gun of choice and I wanted to put it through some testing so I could do a review and offer feedback to her on things to watch out for.  The first thing that I did was do some dry firing and manipulations to become familiar with the myriad of buttons and switches on this.  Yes, this one goes to 11 when it comes to levers and things.  For the Glock fans out there, this may be too much for you.  If you are the type that feels more comfortable with an external safety, then you're going to be ok with this little handgun.

Ruger says that the LC9 is a compact sized double action only (though to me not technically so), hammer fired locked breech hangun chambered in 9mm.  The action needs to cycle for the trigger to reset, so not really DAO but if Ruger says so...

So, here are some initial observations.  The LC9 has a loaded chamber indicator and this thing can't be missed.  It's one of the things that caught my eye the first time I saw an LC9 on TV.  I wasn't a fan.  I think this is just going to fall down to personal preference.  Some people may like them, some people won't and some will be indifferent.  This thing just sticks out a bit too much for my taste.  The second thing that stuck with me was that the LC9 has a magazine disconnect.  I'm not going to go down the bunny path of the mag disconnect and why I'm not a fan.  Weer'd did that in plenty of detail.  Suffice it to say that I'm in his camp on this.  I wish Ruger would not have let a couple of states drive the market for the rest of the country.  So, getting past those, let's go over other levers:

The safety:  I can say that the safety is easy to disconnect on the draw.  I had heard that they attempted to position it much like a 1911 and it seems to be right there.  The question of why you need a safety on a double-action only pistol is another debate we won't have right now, but I don't see the purpose.  Also, it may be easy to take off but it is a bear to engage again without rotating the gun or using your off hand.  This may not seem like that big of a deal at first.  I mean, it's really important to be able to take it off when you need it, right?  Well, if you are the type of person that relies on the safety (which you shouldn't) and it's difficult to engage, you might not do it.  So, if you think it's engaged and it isn't and you rely on that (which you shouldn't) that could be an issue.  If this were a gun I was planning to carry I would carry without the safety engaged in which case it really isn't different from carrying a revolver.

The slide release:  Again, this thing is a booger to disengage.  I'm only hoping that the stiffness of engaging the safety and pushing down the slide release will become easier with time as the sharp edges wear off.  For now, a fast magazine change might run into a snag.  Personally, I train to rack the slide with hand over the top of the rear of the slide and not use the mag release all that much, so I wouldn't notice this issue.  Actually, because of the difficulty doing it the way I usually do saves quite a bit of time.  Still, it could cause problems if you train to reload using the slide release.

The trigger:  Per the Ruger advertisement, the trigger is a smooth double action pull.  I've heard from some that the trigger is terrible, but that's not what I found.  The only thing I noticed is a small click at the end of the trigger pull that caught my attention.  I'm not sure what that is, but if you pull to the click and release, then pull again it doesn't click before the hammer falls.  *shrug*  I dunno.  It would catch my attention if I were making controlled, accurate shots but I don't think you'll notice it much if you're shooting at normal speed.  The only thing I can guess is it is related to the magazine disconnect, but I don't really know.

After having some range time, I was so very wrong about my initial thoughts on the trigger which you see struck out above.  The click is noticeable and distracting.  Especially since it comes just before the trigger actually breaks.  I'm not a fan at all.

Without the grip extension on the magazine, this is one of those guns where you will see "pinky swing".  In other words, the pinky doesn't rest on the grip.  I don't really have a problem with this, as I've found a technique that reduces my reliance on the pinky for grip.  However, this Ruger shipped with a magazine that has the pinky extension as well as the normal floor plate so, problem solved.

So, now on to the Range pictures.


Yeah, so I think I've said most of what I need to say about the feel of the gun. All of that said, it does shoot just fine.  Not too much recoil.  Mrs. 45er wasn't too much of a fan, but she was able to control it just fine and keep it on target.

It's kind of hard to get that picture and I was short on time.  Yeah, the sights are kind of small for ones that are dove-tailed into the slide.  The bases of the sights are actually pretty sizeable, but not the sights themselves.   They shoot just fine, though.

The flyer was all me.  This is the head square on the target and the grouping is a 5 shot group freehand at about 10 yards.  The 6th hole is me letting the trigger get to me.  I jumped a bit on the click before the shot broke.

The size is ok and the grip with the extension works just fine.  Recoil is quite manageable in the 9mm for the size of the gun.  It is very concealable. 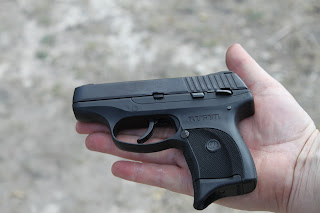 This is the Ruger LC9 with a Kel Tec P3AT on top for size comparison.  I'm in no way comparing the two against each other since it is apples and oranges, .380 vs 9mm and bigger calibers just have to be built different.

The breakdown is simple.  There is a switch forward of the slide release that is flipped down and the retaining pin can be dropped out allowing the slide to come off of the frame.  From this point, disassembly is pretty typical.

So, would I get this one?  Probably not.  It is a fine gun and seems to work just fine.  There are too many compromises made by Ruger that I don't like.  To me, it equates to getting away from simplicity which means just more gadgets to cause a failure or problem.  The magazine disconnect seems simple enough to remove, but why when there are so many other options in a growing market?

Thanks to Uncle for the link and the Uncleanche.
Posted by 45er at 10:05 PM