To start off, I will show you an amazing piece of discussion regarding bacon.  It's everything I believe on the subject:

Heh.  Of course, you know I ripped the title of the post straight from the video.  Now, on to the meat of the matter.  The curing is complete and...

So far, so good.  The color is right.  So, after taking it out of the fridge, I thoroughly rinsed and then soaked each slab in cold water for 30 minutes.  After draining and drying with paper towels, we're ready to do some testing.  At this point I was a bit concerned that maybe I let it cure for a bit long and it might be too salty.  Turns out that was all just nonsense.

Also, this is where I give HUGE kudos to Old NFO for mentioning black pepper curing.  This was oh so fantastic and was my favorite.  It had a wonderful black pepper flavor throughout the whole piece of bacon.  Mrs. 45er preferred the brown sugar cure.  It had a nice sweet/salty flavor going on.  The chipotle was very nice, but I'm afraid I didn't give it much of a chance.  It had a nice cure and wasn't overpowering in flavor, but had just a nice hint of heat in the back of the throat.  Unfortunately, I used the worst cut of meat for that cure since I thought it might not be that great.  Turns out it was just fine.  Oh well, we'll have more soon. 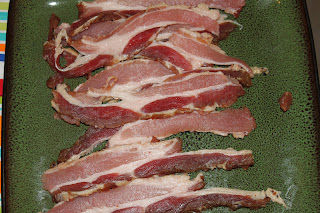 So I slice a bunch more of the black pepper cured stuff and filled up the pan.  I was discovering now that this stuff is rather lean and you don't get much fat in the pan.  I started with a touch of olive oil in the pan until some of the fat rendered out.  Normally, I would add bacon fat to start things off but I didn't want to alter the flavor with commercial bacon fat.  Also, it was hard to cut it real thin but I did ok.  I started the heat medium low until the meat was close to cooked and rendered some fat, then cranked it up just over medium to put the crisp on it.

Just some observations:  What we have come to know as "bacon" has its own distinct flavor and smell.  It is  truly a great thing, but the commercial bacon has a different smell and flavor.  It's a funny thing, what you become used to becomes your point of reference.  It's like eating canned green beans all of your life, then trying fresh ones.  You may not think you like it, but not because it isn't better only because you aren't used to it.  This is kind of like that.  However, I don't know how you couldn't think this was good in a different way.  We loved it.

So now the meat is ready for some smoke.  I cut the slab of pepper cure in half to keep some normal and smoke some.  Same with the brown sugar.  We will see how that turns out after tomorrow.  I'm so happy with the results, I can't wait to do some more curing.  Next up, cured back loin (peameal bacon).
Posted by 45er at 9:32 PM