Well, That Guy and I trudged out in the rain this afternoon intent on making a hunt happen.  We saw some deer this morning, but nothing worth taking.  Same this evening on the deer front.  Just a few yearlings.  But then, the couple of deer milling around bolted and in charged a pig.  Nothing makes a Texas hunter snap up their rifle faster.  He was pretty jittery and I knew I wasn't going to get the perfect shot, so I took the first one as soon as he paused.  It ended up really doing the job.  He was a boar and weighed in at about 80 pounds, the perfect eating size.  I ran out and dragged him back behind the blind and 15 minutes later I had a few deer back in front of me.  Still, just young bucks and yearlings.  Then...  they all looked up.  I glassed with binoculars in the direction where their attention was focused and I saw a flash of black and white in the brush.  Back up came the rifle, but this time the pig was moving across the hill in front of me at about 125 yards.  I snap-shot him in the neck and he went down.  Here's where I made the mistake I always warn people about.  I cycled the bolt out of habit, but then set the rifle back down on the bag.  I was just too sure of myself.  I saw the pig start to move a bit more than normal.  I got the rifle up just in time to see him get up and run up the hill.  The distances were ticking in my head as he ran through the brush.  135... 140  I saw a small opening through the brush and broke a shot.  A miss.  I scolded myself for trying to hit him in the head.  165... 170  No shot through the brush.  180... 185  and he finally broke into an opening.  It was my last chance before he reached the top of the hill so I broke the shot and he fell.  Out of sight.  Great.

Well, after trudging up the hill in the rain, I found him close to the top and I had to drag him down in the mud.  It turns out I hit the neck in the perfect spot, but just about 1/4 inch high.  The bullet didn't connect with the spine itself.  This is how tough a pig is, that it gets up after that kind of hit and runs up a hill.  There were two unfortunate things.  #1 it was a boar and weighed about 150 pounds and stank to high heaven.  #2, the third shot as the pig ran up the hill was a quartering away running shot and entered too far back.  Unfortunately, this one wasn't going to be good for much and I didn't keep it.

It's still raining.  It rained the rest of the night.  I had to stretch a tarp over me to quarter out the smaller boar.  Everything I had with me is completely soaked, muddy and hanging in the garage.  Luckily, my mom had hot venison stew, homemade cornbread and hot chocolate waiting in the house.

All this miserable cold and wet and you know what?  It was a blast.

I did the best I could to get some pictures in the rain and make them blog-worthy (as little gore as possible).  This is the best I could do.  The rest showed the pigs better, but were just a little much for a blog post. 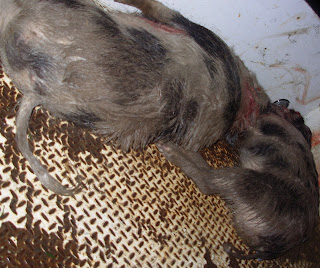 This is perfect for starting to make some sausage.  It's just about time to make the first batch.  I can't wait.
Posted by 45er at 9:33 PM