Hunting Stories: How do you stop a charging boar?

Take away his credit card?

Funny, but it doesn't work when 250 pounds of angry, hairy, razor-sharp anger is bearing down on you.

Many years ago in my previous life, I was a professional hunting guide on a very large ranch with a large number of exotic animals.  On this particular hunt, the client and I were stalking a trophy wild boar.

Stalking is not the best way to hunt for the best or biggest boar when you're a guide.  Hunting from a blind is really the way to go.  It allows the guide to inspect the pigs and make sure you were getting A. a boar and B. one with nice tusks.  Tusks, after all are a big part of the package.  Judging pigs is one of the more difficult things you have to do as a guide.  What is visible is only a few inches and the rest of the tusk is hidden in the jaw.  You have to hope that you get a look at both tusks from a fair distance in failing light and pray that one isn't chipped or broken.

In the below picture; note the upper (smaller) and lower boar tusks.  You can see where they match up perfectly.  This is where they constantly rub together, keeping the lower tusk nice and sharp.  These are about 7 inches long, a little less than 3 of those pointed inches will be protruding from the gums.

Back to the hunt.  I was always flexible as a hunting guide.  The customer isn't always right, but the customer should be happy.  Keeping a customer happy means the salesperson (me) must explain the downsides and risks of certain decisions.  After getting that out of the way, the hunt is on.  I will say that some of my most memorable hunts were ones where we broke from the norm and did something different. This hunt was definitely memorable, but not in a great way.

We were stalking through an area that was cut through the "white brush."  The ranch maintained the hunting areas by cutting down the thick brush to help with visibility and the new growth from the cut areas provided great forage for the animals.  The "white-brush" in that part of Texas was unbelievably thick and thorny.  These cuts were usually done in long, straight sections.  In Texas, we call a long, straight clear section a "sendero."  Senderos can be man-made or natural, but you know them when you see them and they offer great places to see game.

In this particular hunting area we only had pigs and Aoudad.  Neither of these animals are all that tall and the trails and paths they leave through thick brush are more like tunnels.  During the day, the pigs like to lay in the thick brush and keep cool.  It usually takes something to push them out and when you do they are running, of course.  We walked along one of the cuts at the edge of the brush and could hear pigs ahead and to the right of us snorting and moving away.  We had a good view for a fair distance down the sendero, so we decided to move slowly down toward the pigs and hope they started crossing in front of us.  In a few minutes, they started doing just that.  At first, it was a few small ones.  I told the hunter to wait a bit, the larger boars usually followed at the very back of the pack - called a sounder (if they were even with the sounder).  Sure enough, a big one came trotting out.  I had about 30 yards while the pig trotted to determine it was a boar, decide if it was a good one and tell the hunter it was a "go."  Then he had to make the shot.  It all went quick and I could tell by the sound that the shot was a hit.

The downside is that the hit was too far back and low which meant a serious track.  The trail led right into the brush and I got down on my hands and knees to crawl (yes, crawl) after this wounded pig.  I sent the hunter around the side of the brush to the next clear cut.  I told him to be prepared if I pushed this one out and if it was the wounded one, he should take it.   I had my rifle (Remington 700 in 7mm STW with a very LOUD muzzle brake)  laid across my arms in the crooks of my elbows.  As I crawled along I heard something to my right.  I rolled and saw a large boar approaching quickly, apparently spooked by the hunter.  Luckily, he saw me and stopped, then turned and trotted off.  So much fun already.

When I saw the wounded pig, it was in a strange position.  It was quartered toward me with the right shoulder facing my direction, but laying behind a cluster of thick brush.  I could see the head and snout (BIG sharp-looking tusks) and the front of the right shoulder.  I brought the rifle up, resting on my elbows and looked through the scope.  Flipping the safety off, I pressed the trigger and the rifle roared in the close brush.  I usually wore hearing protection, but had not brought any on the stalk.  It was in the days before the great electronic plugs that I wear now and we usually kept them in the jeep or blind, not with us on stalks.  The first shot started the bells ringing.  It also got the boar up on its feet.  Yay for me.  I had nowhere to run and nothing to climb.  Honestly, in this thick stuff I couldn't even stand.  It was best to lay here and keep shooting.  The pig began charging me.  As it turned it faced me directly.  I had cycled the bolt and put another round directly in the center of its chest.  It didn't slow down.  I cycled the bolt again and the crosshairs rested on the left shoulder as the boar turned a slight corner.  The rifle barked a third time and the boar fell and rolled toward me coming to rest about 15 yards away.  Dust was everywhere and I had pieces of dirt and bits of brush all over me that had been blown up by the muzzle brake.  My ears were not ringing - they were playing a stunning rendition of "Ride of the Valkyries."

This rifle holds two rounds in the magazine and one in the chamber without forcing things.  That means I was  empty.  For this very reason, I keep an elastic ammunition holder on the stock.  With the bolt open, I pulled one out, tossed it in the breech and closed the bolt just to be safe.  I watched the pig for many tense minutes before making a move.  When I was sure that I wasn't going to have a repeat of any of the previous excitement, I backed out.  We retrieved the big guy from the other side after I had a chance to meet up with the client and relax a bit. 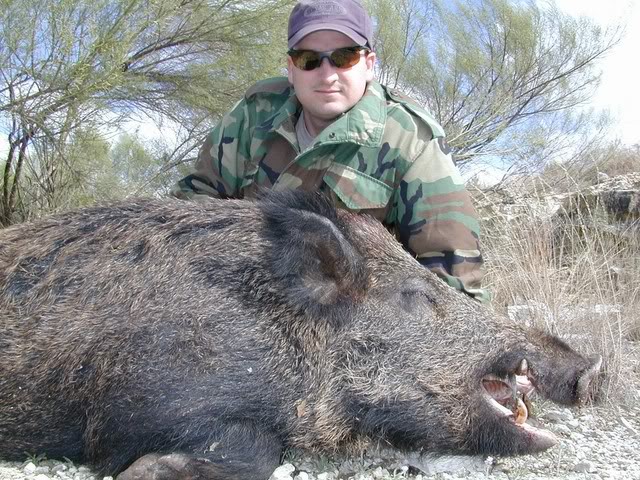 I have had many an exciting pig hunt, but this one by far takes the cake.  At the time, Mrs. 45er and I were recently dating and I spoke with her on the phone almost every night.  Needless to say, she was not pleased when I told her this story.  I was excited and still running on adrenalin, I'm sure.  I specifically remember her being less than thrilled.  I think I was still invincible at that age.