That Guy has been bugging me to get into reloading by sending me little reminders in the form of SALE! emails for reloading equipment.  I was seriously poring over one, when I thought maybe I should root around in old stuff at my parents' for some long lost reloading stuff.  I forgot most of this stuff was out there.

The press was in bad shape.  It has been bolted to the same bench since I was a kid.  It moved along with the bench.  The last time it was used was by me playing around 15 or so years ago.  It was stiff, but a little Liquid Wrench and it started working pretty well.  I'll let it all soak for a while then start scrubbing.


Some of the stuff is newer from when I dabbled years ago, some is older.  The baseball is the box's non-sequitur, I guess.  I have no idea how it ended up in there.  The bottle of powder is a decade and a half old and I doubt will be reliable. 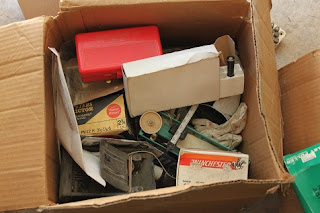 This box had some even older stuff that was mostly before me.  I'm intrigued by the Steven's ammo.  I'll have to check on that.  However, there was a surprise in the white box in here that is half full and is mine.  I'll let the crowd guess the caliber of ammo from the exposed round.

The first thing I did was break out the kinetic bullet puller and get to work on this: 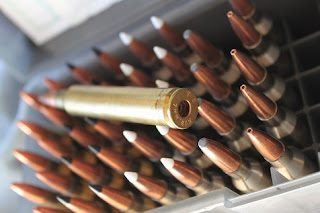 Here is an especially sad story.  A few years ago I found a guy that re-loads and I was really wanting to get a work up done for my 7 mm STW.  Ammunition is difficult to find and the selection is extremely limited.  This is the main reason I dug all this stuff out to begin with.  Anyway, I paid for this box of ammo only to find that two of the rounds weren't even primed.  Did I want to find out what other attention to detail was missed by loading up a belted mag in my rifle and pulling the trigger?  Not especially.  So... 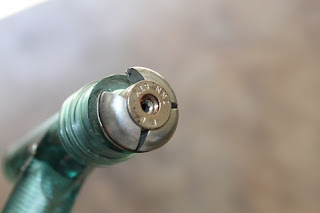 In they went.  I did discover that it's best to put a little piece of tape over the un-primed end if you're going to be swinging it around whacking a bullet out.  Nothing like flying pieces of gunpowder.  A few whacks and...

Lizzie Borden had it easy with just 40 whacks.  I was in the garage forever thinking I was going to break something at any time.

Such a waste of components, especially with today's demand.  I will probably try to recycle the bullets if they still manufacture the types I have.  I can see which work well before buying a big box.  I'm sure the powder will just have to be chalked up to something entertaining.  Time to start the work, I guess.
Posted by 45er at 9:14 PM