The thing I really dislike is a book review with spoilers.  I'm going to do my best to steer clear of that kind of thing.  I mean, what's the point of a book review where you would be reading it to see if maybe you want to read it and there is a bunch of stuff given away.  I will also refrain from just summarizing the book.  I will say this: VEGAS.  It takes place in Las Vegas and since we're about to go on a trip there it seems like everything is oddly Vegas lately.

For the most part I wasn't a science fantasy or science fiction fan before Larry Correia came along.  What drew me in was the fact that he knows his firearms.  I mean KNOWS his firearms.  I bought his first self-published edition book (Monster Hunter International) and was excited about reading something that wouldn't roundly irritate me with gun errors.  I was more than happy.  I was addicted.  This book carries on that tradition of accuracy. 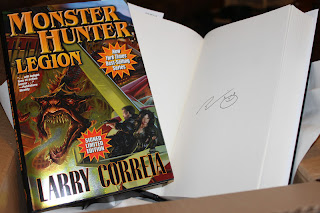 So, a few books later we arrive at Monster Hunter Legion.  If you are just getting in on this series and are thinking about getting this book, DO IT.  But first, you really need to go back and catch up on the MHI series.  Larry doesn't spend time explaining the past or what things are that he assumes you should remember from previous books (such as his awesome Saiga shotgun named Abomination, for instance).  I actually like this.  Why spend pages and time re-hashing the previous stories?  It's why I like my DVR for some TV shows.  I don't need to know what happened previously.  Saw it.

So, how was the book?  In short - incredible.  The story has plenty of action.  There is a bit of down time in this one, but the humor and snark keep it interesting and funny.  If you're already a fan of Correia's stuff, you'll know what I mean when I say that it lives up to the crackalicious reading for which his previous tomes are known.  Honestly, this stuff is brain candy.  Don't think, just read.  Enjoy.  Lose yourself in the monster killing, buffet hitting, full-auto shooting, chicken sacrificing, sarcasm dripping story.  If you're not already a fan, you will be.  Just start at the beginning (MHI).  I got this Saturday afternoon and finished last night.  You will not be able to put it down.
Posted by 45er at 8:16 PM

Email ThisBlogThis!Share to TwitterShare to FacebookShare to Pinterest
Labels: Books